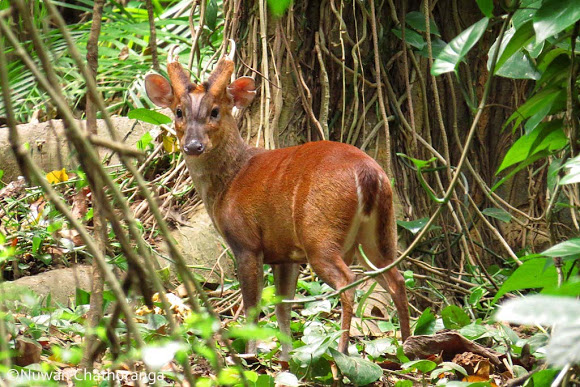 Belongs to the genus Cervidae and The scientific name is Muntiacus muntjak malabaricus. Olumuwa, a herbivorous mammal, is a divider. It is a small brown deer, usually about 20 inches high. They live in Sri Lanka and India. It can be found from the coastal areas of Sri Lanka to the mountains up to 5000 feet tall. It is found in some parts of the arid region. Common in some parts of the arid region. Olumuwa’s buttocks are higher than his shoulders. His ears are narrow. Short. Legs and tail short. There are four toes on each foot. His tongue is very long. It can be dipped and licked all over the face. The male has a long-horned horn blade. Instead of a horn blade, the mouth has two small bony ridges. These are covered with rough ridges like dwarfs. Olumuwa’s body is covered with brown veins almost everywhere. Only the twins do not have hair.
Olumuwa nocturnal

Humans see it in the morning or mostly in the evening. In the morning, it is found when it comes to the tipple in search of food at night and in the evening when it leaves the tipple searching for food. Its food is grass and young leaves of Udupiyaliya and other plants. She usually does not go far from where she lives.
Olumuwa is not usually found in herds. Often males and females behave together. Couple An animal that behaves in pairs. Deers have been found males and females who once lived together will live together for the rest of their lives.

However, Slightly smaller than the male giving the head. She is short with covers. Calves live under a bush. After that, She nurses them and takes care of them. In conclusion, During the calving season, it stays close and feeds on a small amount of food. Grown-up An average person weighs about 10 pounds [10 kg]. His lifespan is about seven years.