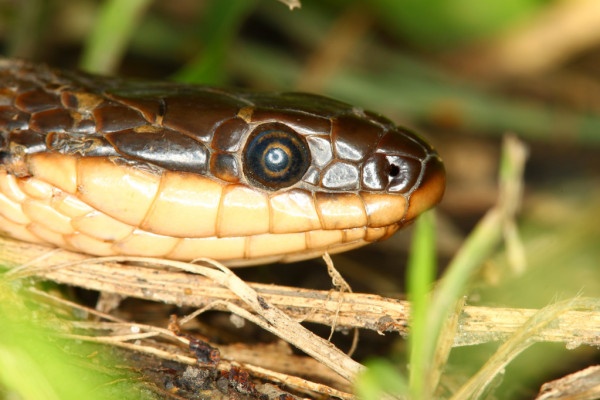 Snakes of two different thicknesses never reproduce, and Coelognathus snakes, which belong to the genus Coca, are widespread in other parts of Asia except ours. The myth is believed to have been formed because the Common Trinket Snake grows to about 130cm and has white spots on the anterior part of the body and only two brown lines running bilaterally without any transverse band on the posterior region. Although it is primarily a nocturnal snake, it can be seen roaming slightly during the day. The terrestrial snake is sometimes found in short trees, and The external medium-sized cylindrical body is covered with smooth corals. The head is slightly elongated, slightly detached from the neck—surface color brown. There are two white spots on each side of the body with black cross straps from the body’s anterior part to the medial body.

The body’s simple bilateral brown lines take on a dark brown color as the pair moves to the lower part of the body (with the black crossbars’ disappearance). Thus, the abdomen becomes white on the belly and then dark brown and light brown on the surface. Has a medium-sized eye with a round eye. In some animals, a thin black line extends below the eye or behind the eye until the 7th or 8th eyebrow (upper lip coral) coral. Some animals have a pair of black stripes on the back of the head up to the first cross. Their leading food is small mammals such as rats and amphibians such as frogs. In addition, there are instances of dependence on animals such as lizards. Animals, such as mammals, compress and swallow.

The ovaries lay 6-12 eggs in a dark place during reproduction, such as a rat’s nest. At birth, the calf is 20cm -25cm long, and the adult grows to about 100cm in length. This snake’s presence in the field is very beneficial as it is an animal that can naturally control animals such as rodents. That is harmful to the plantation.

But the biggest threat to the survival of these animals is the mistaken killing of a venomous snake due to the Common Trinket Snake’s safe posture. In addition, road accidents and damage to domestic animals are threats to the snake’s survival. As it is a vast island snake, it shows a special conservation status. The Red Data Report considers the snake to belong to the Least Concern (LC) category.

Unusual facts about the mouth