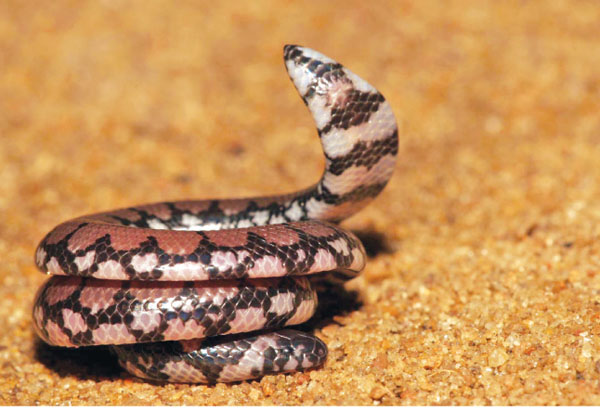 The Pipe Snake, a non-venomous snake endemic to Sri Lanka, is a beautiful snake species found in the wet, dry and intermediate regions. It is not an attempt to attack but a tactic to escape from predators. Even in the countryside today, some identify the two-headed serpent as a venomous snake.

It has a small body covered with smooth corals and a flattened head towards the horn, formed for navigation in soil environments. The body’s surface is black, with brown, reddish-brown, and orange-brown spots, running bilaterally from the neck to the tail. White spots can be seen scattered in the abdominal-lateral region. However, The body has a beautiful black-and-white pattern on the surface and the underside, and from a distance. it looks like a piece of clothing. It feeds on termites, earthworms, small amphibians as well as other insects. In addition, there have been reports of soil-dependent snakes relying on tadpoles.

They often fall prey to predators, such as buffalo, burrows, pigs, and other venomous snakes, as well as owls, which come to the surface at night.

In addition, Reproduced by oviducts, this species produces between 1-15 baby snakes at a time.

In conclusion, It is endemic to Sri Lanka and may be threatened with extinction due to daily killings and deforestation. This snake species is classified in the Near Threatened (NT) category in the IUCN Red Data Report.